This portfolio page showcases my contributions to the project, Bibliotek. To view my full portfolio, please visit danielteo.me.

Bibliotek is a free book cataloguing application that is simple, fast, and easy to use. It is targeted at heavy readers who require a hassle-free way of managing and keeping track of their read and unread books.

Bibliotek has a GUI created with JavaFX, and is written in Java, with approximately 15 kLoC.

Contributions to the User Guide

If there is a command that you use frequently, and you find typing out the entire command to be too tedious, you can add a command alias to reduce the amount of typing needed.
Format: addalias ALIAS_NAME cmd/COMMAND

If you have forgotten some of your command aliases and need a quick refresher, you can use the aliases command to view them.
Format: aliases

After entering the aliases command, Bibliotek shows Listed xx aliases. to indicate that the command was successful. The right panel will display a list of all your command aliases. 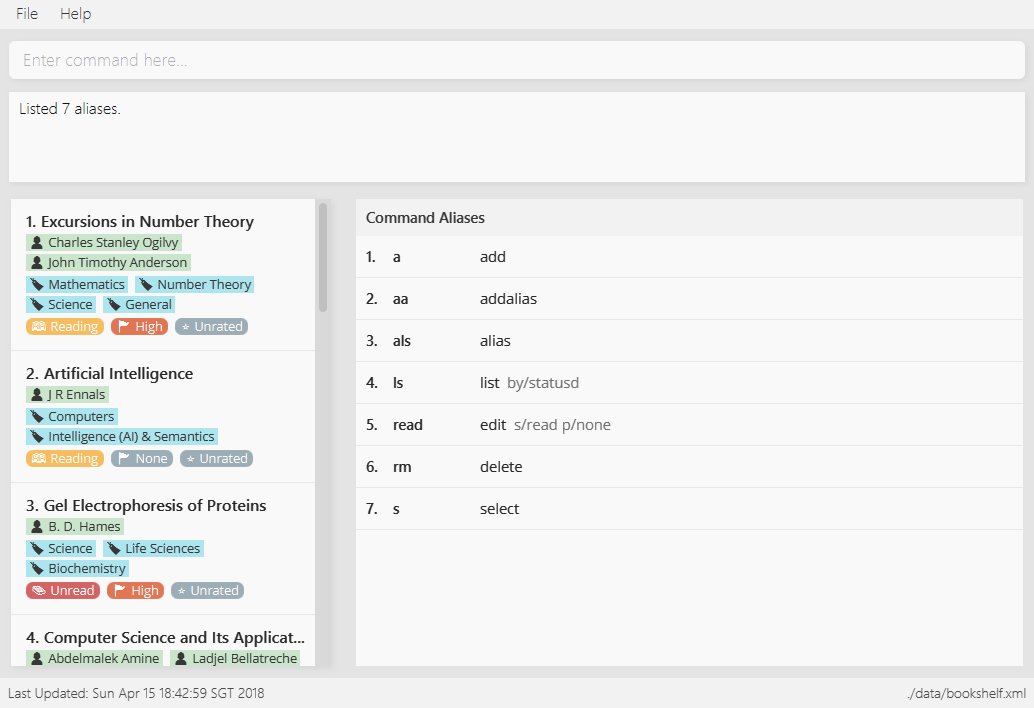 If you no longer require a command alias, you can remove it using deletealias.
Format: deletealias ALIAS_NAME

Contributions to the Developer Guide

The Network object is passed by LogicManager into each Command, and is available for use by default, without the need for the Command to override setData.

The Network API exposes various methods for making web API calls to various endpoints. Apart from those, it also provides a stop method that allows for graceful shutdown of the internal asynchronous HTTP client.

As an example, if a command needs to retrieve search results from Google Books API, it can make a call to the searchBooks method of the Network API. The following sequence diagram shows what happens when searchBooks is called:

The methods shown above are asynchronous - they will not wait for the completion of the HTTP request. In particular, note that when Network#searchBooks finishes execution, the HTTP request might not have completed yet. This is accomplished through the use of a chain of CompletableFuture objects, which holds the operations that the above methods wish to apply to the data. This is most evident in the executeGetAndApply method, as shown below:

Once the HTTP request completes, the operations in the CompletableFuture objects will be executed. These operations are summarized by the following activity diagram:

With the network component in place, the search command can now be implemented.

When a search command is entered, a SearchCommand object will be created if the parsing of the command was successful, which will make a call to searchBooks on the Network API, as shown in the sequence diagram below:

As described in Network component, when the event is handled by NetworkManager, this will result in an asynchronous HTTP request being made to Google Books API. Once the request and the parsing of the response completes successfully, the operation added by the thenAccept call in SearchCommand will be executed. This results in the execution of the following method in SearchCommand:

The command aliasing system allows the user to specify short command aliases to use in place of the original commands. This improves the user experience by reducing the amount of typing the user needs to do.

The user can customize their command aliases using the addalias and deletealias commands. These commands allow the user to add and delete aliases respectively.

When the user attempts to add a new command alias using addalias ALIAS_NAME cmd/COMMAND, the user input will first be validated and pre-processed by AddAliasCommandParser.

AddAliasCommandParser verifies that both the ALIAS_NAME and COMMAND are non-empty, before searching the COMMAND for the first occurrence of an empty space that is followed by a named command parameter. Using this point, the parser will split the COMMAND into two parts - the prefix, and the named arguments. The figure below shows an example for the edit 12 s/reading p/high command.

The searching and splitting is accomplished using the following regular expression.

Following this pre-processing step, a new Alias will be created using the alias name, command prefix, and named arguments.

The Alias is then added to the UniqueAliasList in ModelManager, and this update will cause an AliasListChangedEvent to be posted. The event is handled by StorageManager, which saves the updated alias list to data/aliaslist.xml.

The user can use command aliases in the same way they use normal commands. In this section, we assume that the user added rd as an alias for edit s/reading.

Whenever a command is entered into the command box, the command will be passed by LogicManager into BookShelfParser#applyCommandAlias, where an attempt will be made to apply a matching command alias.

The application of a command alias begins by splitting the input into three parts - the alias name (first word in the input), unnamed arguments, and named arguments. The figure below shows an example for the rd 12 p/high command.

This splitting is accomplished using the following regular expression.

The result of the application of the alias is a new command that is formed by splicing parts of the user input into the aliased command. Using rd 12 p/high as the user input, this process is demonstrated in the figure below.

The resulting command, edit 12 s/reading p/high, will then be parsed and executed, instead of the original user input.